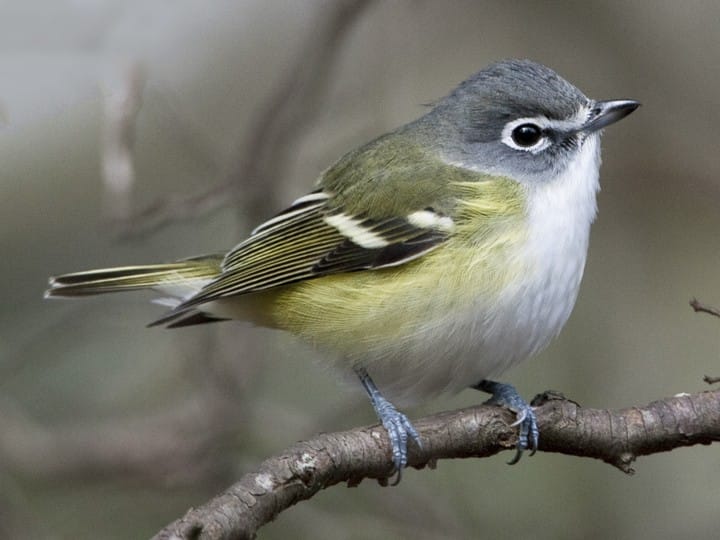 The wait is finally over! Sub-zero days and major snowstorms were the call of the first days of spring in my woods this year. More so than ever, winter over-stayed its welcome.  While pulling taps last week I noticed the bird chorus had suddenly, and likely overnight, added many new voices. The arrival of the first spring birds to Vermont’s forests and fields has provided an even more reassuring salve to our winter-weary bones. ‘Who are you?’ ‘Where am I?’ ‘Over here’.  That incessant question and answering pattern could only be one of the vireos. Later in the spring I would have to listen longer and more closely but given the early time of year there is likely only one possibility. Along with the arrival of robins and red-winged blackbirds, the familiar harbingers of spring, another hardy soul of the forest had arrived, the Blue-headed Vireo. The Blue Headed what you may ask? Yes, the Blue-headed Vireo.

The Blue-headed Vireo is a member of the Vireonidae family, an insectivorous bird family found throughout the western hemisphere. Vireos are sparrow-sized birds with a ‘chunky’ build whose respective color patterns contrast with an olive-drab theme. It’s no wonder their family name comes from the Latin for green. Blue-headed Vireos are one of five vireo species that nest in Vermont. Unlike its four cousin species, the blue-headed is among the first songbirds to return to Vermont. It arrives from its winter home in the Amazon Basin in early April to establish its territory and begin nest construction. Without leaves on the deciduous trees at that time of year, these vireos select coniferous trees, often eastern hemlock, to provide them with the necessary concealment for a successful nest.

Upon arrival males will begin defending their territories, which studies have reported can be as large as 16 acres. Defense is usually in the form of the vireo’s characteristic short and repetitive up-scoop and down-scoop phrases. For birders keen on adding to one’s life list, this is where the challenge lies. The 5 Vermont vireo species have a very similar vocal pattern to one another. The identification skill comes in discerning the subtle pauses, relative tempos, and ranges of clarity of each species’ song that serve as distinguishing characters.

Nest construction, incubation, and tending to the young are shared duties of both parents. The female will lay 3-5 eggs in a nest of leaves, rootlets, bark strips and often line it with animal hair. Vireos will construct their nest in a forked branch 10-15 feet above the ground. Eggs hatch in about two weeks and the young will be fledged in another two weeks after that. Typically, the period of egg laying to fledgling takes place from late May to late June. Although the nest is most often in a conifer, Blue-headed Vireos forage for insects, beetles, and spiders among the mixed coniferous-deciduous forest of uneven ages and heights. The best habitat for the vireo is a contiguous, unfragmented forest that contains periodic holes in the crown to allow sunlight to reach the mid-canopy and forest floor. The diverse tree and shrubs stimulated by the sun is where the best nesting and feeding conditions will occur. Being able to take advantage of the diverse coniferous-deciduous forest may be one reason the Blue-headed Vireo population is one of the few North American bird species to be experiencing an increase in numbers.

As my tap pulling task passed from morning to afternoon, the vireo continued his task step for step too. ‘Who are you?’ ‘Where am I?’ ‘Over here’.  Soon, I thought, the other vireos (Red-eyed, Yellow throated, Philadelphia, and Warbling) will be arriving and with them, the forest will be brimming with questions. The only answer I have is to maintain my commitment to keeping my part of the forest vibrant and connected to the neighboring forest land.  Doing so is the only way I know to provide a future for the forest birds.

Pulling thousands of spouts can be very repetitive drudgery, but only if you look at it that way. With the woods so full of energy and change, the spectacle of spring renewal melts the minutes into hours and all too soon the work is done. Now on to splitting next year’s sugarwood. And more birds to share the day with…