Looks can be deceiving: Purple Loosestrife 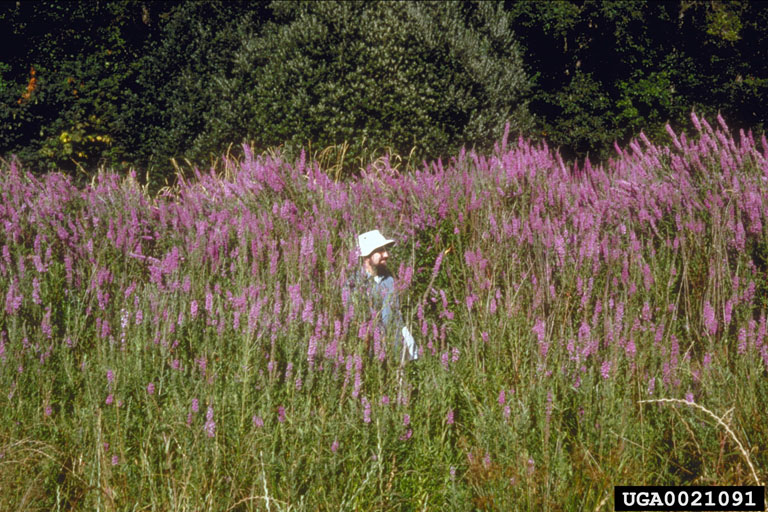 Looks can be deceiving: Purple Loosestrife

The warm afternoons and longer days of May and June bring along thoughts of summer, and summer flowers. If you’ve ever spent a late August afternoon along a lake with a reedy shoreline, you may have noticed the brilliant, beautiful purple flowers of this month’s focal plant: purple loosestrife (Lythrum salicaria). 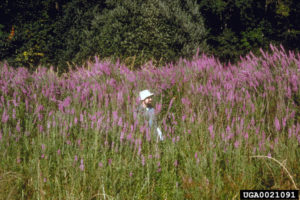 Originating from Asia, Europe, and Africa, purple loosestrife is thought to have been introduced to North America on the east coast in the early 1800s, as an ornamental species. Today it can be found in almost every state in the U.S., and almost every province in Canada. In Vermont, purple loosestrife is documented in every county. This plant can tolerate a variety of soil conditions, but prefers open, moist soils to establish. You can find it in wetlands and wetland margins, along the shores of rivers and lakes, and wet disturbed areas like ditches and fields.

Purple loosestrife is an herbaceous perennial plant, and mature plants can host multiple, erect stems, in clumps several feet wide. The leaves are long and narrow, arranged oppositely or whorled, around a square stem. The roots are thick and hard, and can grow laterally. One mature plant can produce 1-3 million seeds, and a new plant can sprout, grow, flower, and produce viable seed in the first growing season. In some areas, sterile cultivars are sold, but research has shown that even these plants can produce viable seed.

The seed production, lateral root spread, and competitive nature of purple loosestrife allow it to quickly overtake an area. This spread often results in what is called a monotypic stand, where one species persists. Monotypic stands not only have direct impacts to native vegetation by outcompeting them for space and nutrients, they also displace the wildlife that would otherwise use the diverse wetland or water’s edge habitat. When purple loosestrife grows densely over large areas, soil can get trapped in its dense roots and stems, effectively raising the water table, or closing off waterways. In Vermont this species is listed on Vermont’s Noxious Weed Quarantine, which makes it illegal to buy, sell, or transport.

Shoot emergence and seed germination can occur in late April, but the easiest time to spot this plant is when it flowers from early through late summer (mid June – September). Some actions you can take in your yard include pulling young plants by hand or with a tool (like a garden fork), but take caution to remove all parts of the plant above and below ground. For older plants, hand pulling may require repeated removal, for multiple years. Cutting flower heads is also useful to slow the spread of the plant when removal is not an option. Removal along shoreland of species listed by the state as noxious or nuisance is permitted: http://dec.vermont.gov/sites/dec/files/wsm/lakes/docs/Shoreland/lp_NoxiousNuisancePlants.pdf

There is a similar, native species— Chamerion angustifolim (narrow-leaved fireweed), which also has bright purple flowers, but the flowers only have 4 petals, and the leaves are arranged alternately.

To learn more about purple loosestrife, check out www.VTinvasives.org and these additional resources:

Caption: Flowers of purple loosestrife are purple in color, and are clustered along a tall spike.