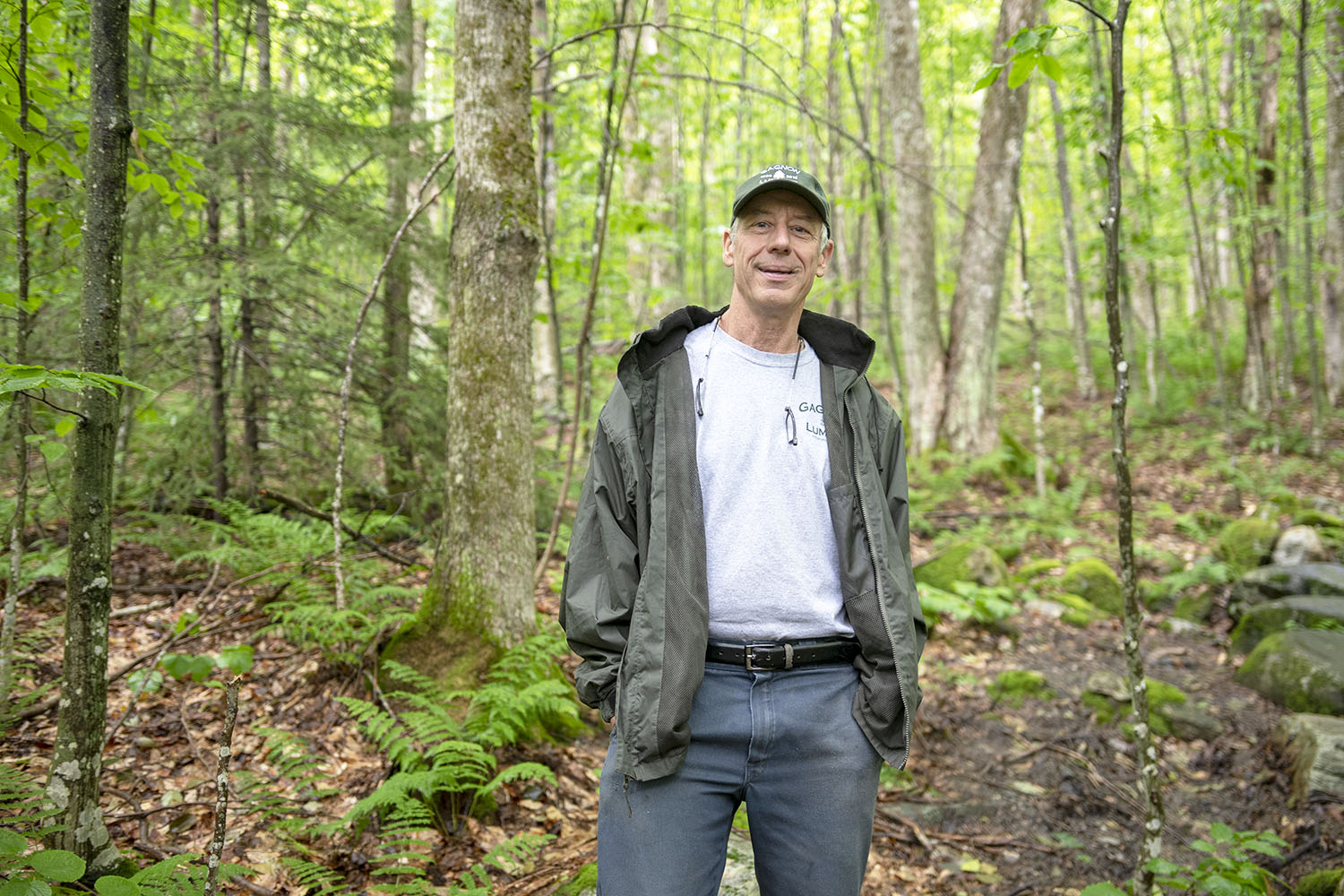 Somewhere between the Oak trees near the Massachusetts border and the Maple trees of Northern Vermont, Ken Gagnon earned his trail name: the walking sawyer. “You meet folks along the trail and get to talking,” said Gagnon, owner of Gagnon Lumber in Pittsford, Vermont. “People were interested to learn about the species of trees and forest vegetation, or the parts of the Long Trail that were built along old woods roads. Once they began to understand how the trails and trees around them connected to Vermont’s 250-year-old logging history, they saw the forest differently.”

Sharing his perspectives as a lifelong Vermonter, outdoorsman, and sawmill operator along the trail, Ken found his fellow hikers to be not only receptive, but genuinely interested, and it occurred to him that his industry could do a much better job connecting hikers more intimately with Vermont’s working forests. “Our industry has a perception problem that is largely outdated,” he said. “It seems to me that the people who are enjoying the forests and experiencing the benefits of careful forest management might be open to a different message.”

Mike DeBonis, executive director of the Green Mountain Club and a forester, agrees. “The Long Trail was created to connect people with the outdoors,” he said. “Foundational to that is the belief that recreation is a gateway to conservation and responsible land management. Hiking allows people to experience and think about land in a very tactile way.”

Many of the negative perceptions that exist today stem from clearcutting that occurred more than a century ago when logging and agriculture were the state’s main industries. Farmers cut forests to clear fields and loggers cleared large swaths of hardwoods with little regard for regeneration. By the early 1800s, Vermont’s 4.6 million acres of forest had been reduced by more than 80%.

Learning the lessons of the past, today’s forest managers focus on sustainability and maintaining healthy, productive forests. Thanks to generations of responsible management, Vermont is now more than 78% forested, making it the fourth most heavily forested state in the country. Yet, those lingering perceptions persist.

“Forestry and recreation have co-existed for decades,” said Mike Snyder, Commissioner of Vermont’s Forests, Parks and Recreation Department (FPR), “yet most people don’t think of recreation as part of the working landscape.”

That may be in part because timber harvests have largely been invisible to hikers and other recreators. “In the past, we planned visual buffers sometimes called ‘beauty strips’ that kept most of the work out of sight,” said Snyder, acknowledging that it can be shocking to walk through a recently harvested area. But, in recent years, Snyder and the department he leads have opted instead to explain what is happening and why, and to demonstrate what good forestry looks like. “Active harvest sites can and should be used as an educational opportunity to showcase best practices in modern forestry and the positive outcomes that result,” he said.

Harvesting Good Will in Willoughby

At Willoughby State Forest, FPR foresters Emily Meacham and Scott Machinist are doing just that. One of Vermont’s most pristine landscapes, Willoughby State Forest encompasses more than 7,600 acres in the Northeast Kingdom and includes Lake Willoughby, Mount Hor, and Mount Pisgah among other natural treasures. In recent years, the area has seen significant increases in recreational use, including hiking, primitive camping, swimming, fishing, and cross-country skiing—all of which are happening in tandem with two active timber harvests.

“The harvest areas are in plain view of the trails,” said Meacham. “We are taking an intentional approach to educate the public about the work, and so far it has been an incredible success.” Machinist agreed, noting that on a busy summer day you’re likely to see a 100,000-pound logging truck and people hiking with their dogs in the same area. “It’s remarkable,” he said, “no one seems to be bothered. We haven’t received one complaint.”

In addition to signage that went up even before the harvest began, Meacham and Machinist held public information meetings to explain the process and answer questions. “We walked people through the long-range forest management plan,” said Machinist. “This harvest takes into consideration ecological objectives, protection of both wildlife habitat and water quality, and enhanced recreation. We made all the data we’ve collected available so people could see how decisions around the timber harvest were made using science and a long-term, big-picture view of forest health.”

A few specific examples of the Willoughby plan include the protection of amphibian breeding pools and year-round wet areas where salamanders thrive, regeneration of Beech trees important for bear habitat, planned buffer areas around the Round Leaved Orchid and Yellow Lady Slipper, both endangered plant species, and combating the effects of Beech bark disease in the area. “Any unique feature triggers additional review,” said Machinist.

Signage in and around the harvest areas offers further explanation for visitors, and throughout the forests, recreators will find signs identifying past harvest areas dating back to 1985. “It’s important to show what a harvested area will look like after five, ten or twenty years,” said Machnist. “The signs serve as historical reference points throughout the forest.”

Like FPR’s approach in Willoughby, the Green Mountain Club has also used signage, newsletters, and social media to open up a deeper dialogue about forest management within its community. Attracting more than 200,000 hikers annually, the Long Trail accounts for more than half of all trail visits to the state each year, offering a significant opportunity to educate and engage hikers. “The Long Trail is a 272-mile footpath in the forest,” said DeBonis. “We want our community to understand that you can have a wild, remote experience in a working landscape. Wild does not necessarily mean pristine or untouched. Vermont is a small place; we get a lot from our landscape.”

Keeping Vermont’s extensive trail systems free and open to the public relies, in part, on the revenue generated through timber harvests. “Trees pay the way for the development and management of recreation trails,” said Snyder. “On state owned land, the timber harvests provide some revenue that helps pay for maintenance and upkeep, and on privately owned land, the income gives landowners an incentive to keep their land accessible.” In Vermont, where more than 80% of forests are privately owned, that incentive also helps private landowners to keep forests intact and safe from development or parcelization.

In Willoughby, all of the income generated through the timber sales goes into a Land and Facilities Trust Fund at FPR, and is used to fund projects including trail and road maintenance. “We call it the ‘trees for trails project’,” said Meacham. “All the money goes right back into the land.”

“It’s the missing link for people,” agreed Gagnon. “Timber harvests are the key to keeping the entire system sustainable. It’s the economics of the timber industry that keep Vermont’s forests as forests.”

A 2016 report by the Vermont Trails and Greenway Council found that more than 400,000 people visit just four of the state’s trail systems annually. Data collected from the Catamount Trail Association, the Kingdom Trails Association, the Vermont All‐Terrain Sportsman’s Association, and the Green Mountain Club showed that the trails supported 365 jobs and generated more than $30 million in economic activity annually. When accounting for other trail systems, the total use and impact of Vermont’s many trail systems is presumably much higher. Many people active in the recreation, hospitality, and forest industries see promoting the state’s recreational assets as key to driving economic growth, work that is happening through the Vermont Outdoor Recreation Economic Collaborative (VOREC).

“We are seeing a change in the way visitors recreate here,” said DeBonis. “It used to be that people came to hike for a few days. Now, they hike one day, bike the next, and then head out onto the water for a day or two. The key to a viable recreational network is to offer a lot of varied opportunities, and we have to do that in an intentional way that protects the natural resources that draw people here in the first place.”

“Our forests are one of our greatest natural assets,” added Snyder. “The connection we hope to make for people is that it’s the people working the forested landscape, along with the volunteer recreation enthusiasts building and maintaining the trails, who are stewarding its future.”

Christine McGowan is director of the Forest Products Program at the Vermont Sustainable Jobs Fund, a nonprofit organization committed to nurturing the sustainable development of Vermont’s economy. Learn more at www.vsjf.org and www.facebook.com/VermontSustainableJobsFund.