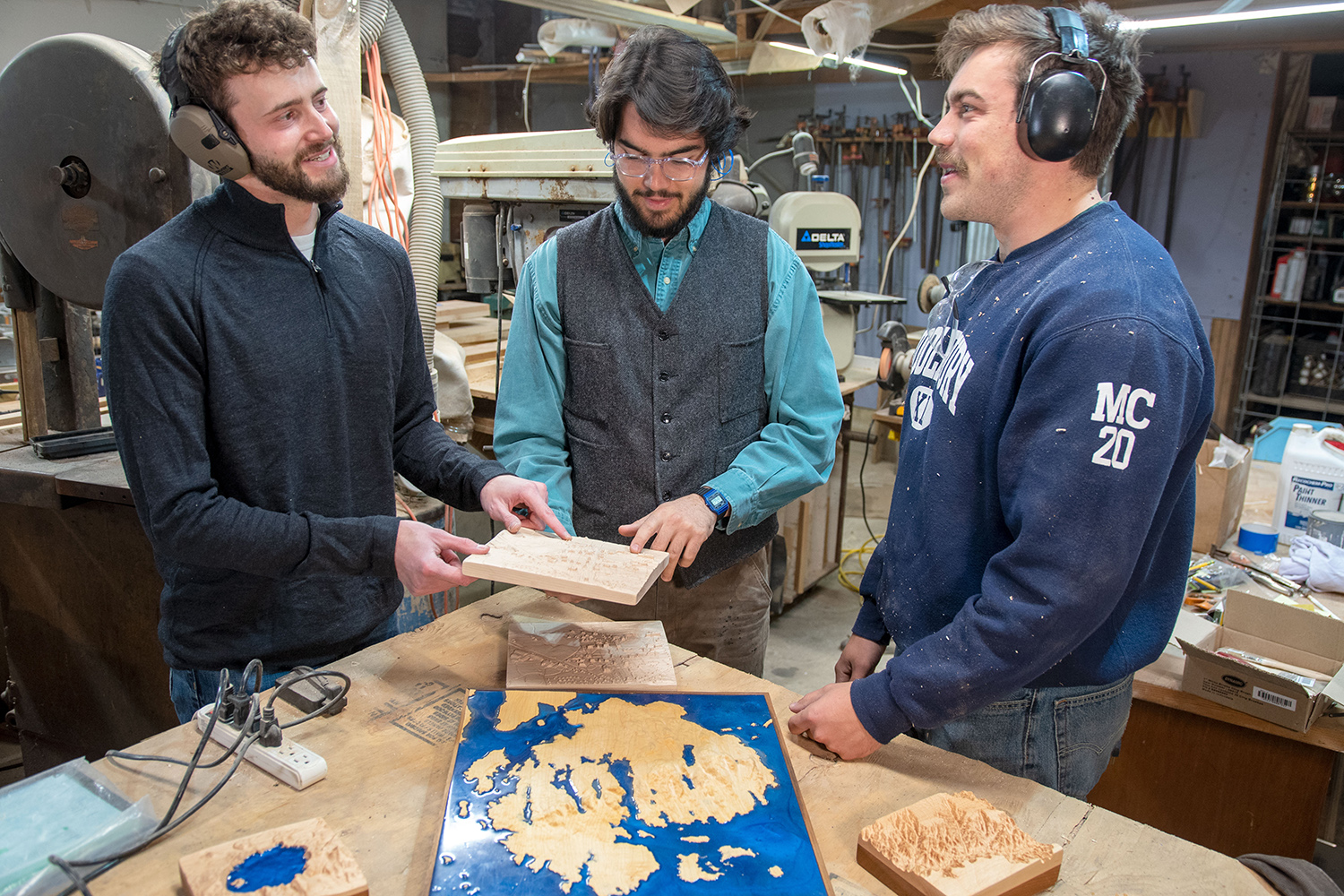 When three friends at Middlebury College couldn’t find the perfect gift for their boss, they decided to make something special. Nathaniel Klein, Jacob Freedman, and Alex Gemme wanted to thank their supervisor at the Middlebury Snow Bowl for helping them establish a scholarship program. “We had such a great experience coaching skiing and wanted to give her something that was connected to the Snow Bowl,” said Gemme. “We had this idea of carving a model of the ski hill out of wood.”

And so, they did.

Freedman, a geography major, figured out how to map the ski area using Geographic Information System (GIS) technology. From there, the trio worked out how to send the digital mapping file to a CNC router that would carve a model from wood. Klein, who grew up in his grandfather’s woodshop, put the finishing touches on the model, hand sanding and rubbing in linseed oil to bring out the grain of the wood. It was an instant hit.

“Everyone kept telling us we had to sell them,” said Gemme. “We didn’t set out to start a business; it was actually an accident.”

Still undergrad students at Middlebury College at the time, they registered their company in the spring of 2021 and Treeline Terrains was officially in business.

As biology, chemistry and geography majors, they realized they would need to brush up on their business skills to really give Treeline Terrains a go. Senior year, they enrolled in Middlebury Entrepreneurs, a winter term course taught by the Vermont Center for Emerging Technologies for students who want to start their own business.

“Without the class we would not have gotten to where we are,” said Freedman. “It allowed us to take our idea in this amorphous shape and figure out the main roadblocks we would have to face to go from an idea to selling something. From there, we were able to springboard into an LLC that spring, which was a quicker timeframe than what we anticipated.”

In the summer of 2020 they received a grant from MiddChallenge, a program at the college that funds student entrepreneurs for the summer who want to explore a business idea. They decided to buy a CNC router and move into Klein’s grandfather’s basement in Massachusetts for the summer where they would have access to a workshop and woodworking tools. They spent the summer refining their models, figuring out how to add features such as buildings, rivers, lakes, and trails… and planning their return to the Green Mountains.

“It was always our goal to be back in Vermont,” said Freedman, “but housing is really scarce and we were in the middle of the pandemic.” After looking all over the state they found a local builder willing to let them use his shop back in Middlebury and, through their connections, were also able to land an apartment.

“The community connections were on our side,” added Freedman. “It was a business decision to come back to Middlebury and it was definitely the right one.”

Another key component of their decision to locate the business in Middlebury was their relationships with A. Johnson Co. lumber mill in Bristol, where they purchase all of the wood for their models. “They’re a great family and have competitive pricing and good products,” said Klein. “They have expertise from working in the industry most of their lives and are willing to share that with us. Once we found them, we were not going to go anywhere else.”

Connecting people to the places they love.

As the models have evolved, so has their customer. The business has caught the attention of local nonprofits, including the Middlebury Area Land Trust who commissioned them to make a model of their 18-mile trail system so that kids could engage tactically with the trail system, and Vermont Adaptive Ski & Sports who had them create a 3-D model of Sugarbush Ski Area for visually impaired skiers and riders. “They are education pieces that help people connect with place,” said Freedman.

They also recently completed a large commissioned piece for a family that wanted to see their home on a map of their local ski area. “It was really fun to make,” said Gemme. “The larger the scale, the more terrain there is to play with.” He added that the family marked their home on the model with a gemstone.

One of their largest pieces was presented to Senator Patrick Leahy November 10, 2021 to commemorate the Senator’s receipt of the Vermont Outdoor Business Association Trailblazer Award. The piece is a physical outline of Vermont showing all of the state’s natural mountain and water features—something they would like to do more of for other states.

While a large, custom model might run into the thousands, most pieces on the company’s website range from $70 to a few hundred dollars. The current collection includes lakes and ski areas in Vermont, New Hampshire, and Massachusetts, a Saddleback Mountain cribbage board, and a model of the Adirondack High Peaks region. This holiday season they are introducing keychain models of Mt. Mansfield and Camel’s Hump that will sell for $14.

“The pieces are really about helping people to connect to the places they love,” said Freedman.