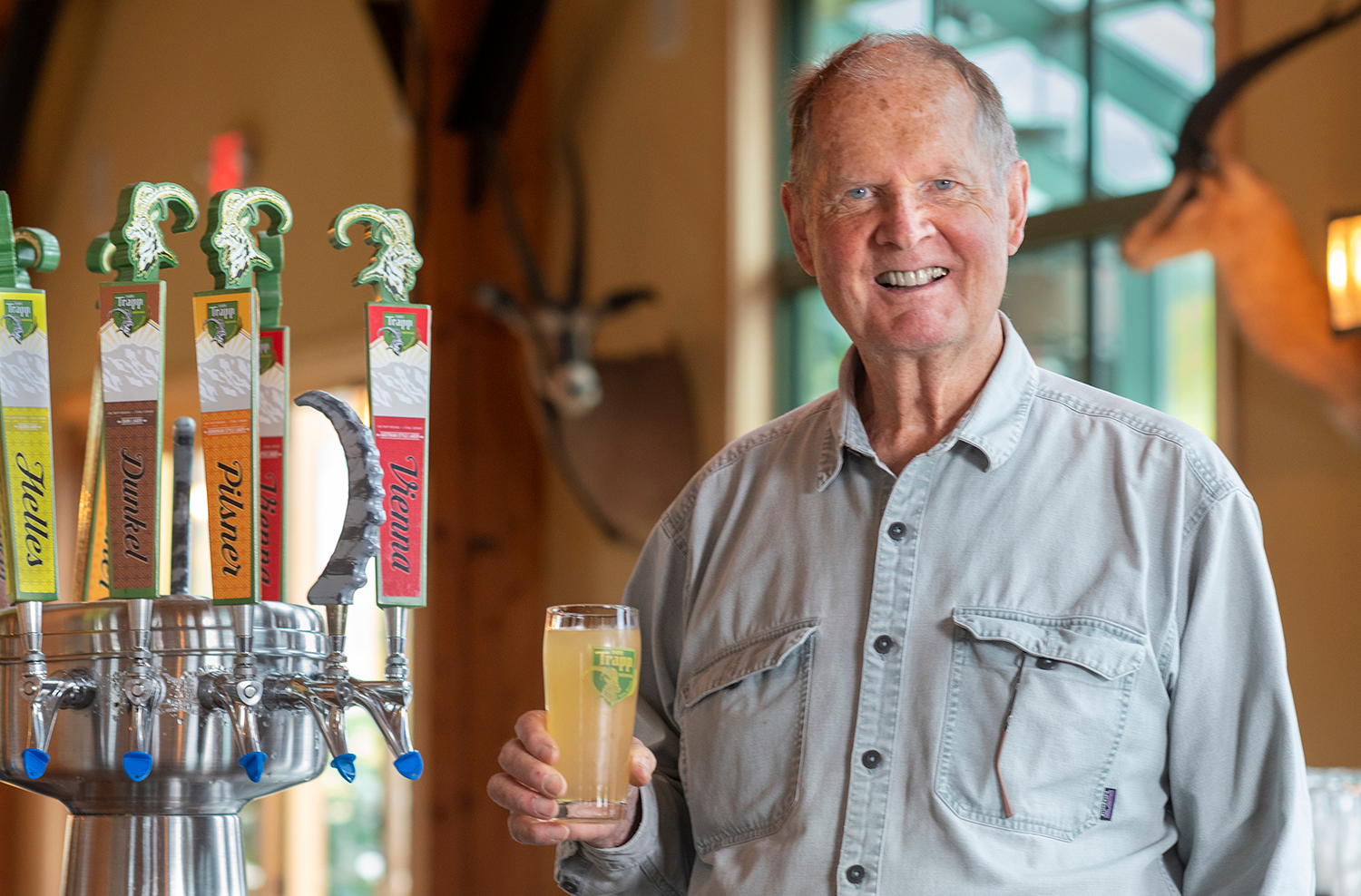 The story of von Trapp Brewing begins fifty years ago in the forested hills behind the resort, where a natural spring bubbles clear water up to the surface of the earth. The spring is fed by moisture that condenses on the forest canopy, gathering on leaves, twigs, and pine needles until eventually it drops to the ground into the fertile soil and filters down to the aquifer below.

“It’s a lovely spring,” said Johannes von Trapp, president of Trapp Family Lodge, a forest ecologist, and the youngest of the famed Trapp Family Singers. “It was the inspiration for the brewery.” 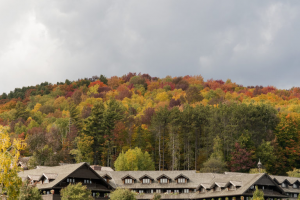 The Trapp Family Lodge property encompasses 2,600 acres—70 acres of which are developed, 130 of which are in pasture, and 2,400 that remain forested. Photo by Erica Houskeeper.

Von Trapp discovered the spring in the early 1970s when the reservoir that supplied Trapp Family Lodge with water ran dry. After lugging three truckloads of 40-gallon milk cans from the local creek back up to the lodge, von Trapp dug out an 1890s U.S. Geological Survey topographical map and located a spring up in the hills above the lodge. Fresh from Yale School of Forestry, von Trapp put on his hiking boots and headed out into the forest to find a better solution. He ended up with not only a new spring to feed the lodge, but also the idea for a brewery.

“Natural spring water is particularly favorable for brewing lager,” said von Trapp, noting that many of the early breweries in Austria, where his family originated, were located near mountain springs. “The pH balance and trace minerals found in spring water are important to the taste of the beer. It’s something I always wanted to do.”

The quality of the spring water, located a mile and a half from the brewery, and the resulting lager, is very much a product of its environment. Situated deep within 2,400-acres of forested land on the property, the spring is intimately connected to the health of the surrounding forest.

To fully appreciate the relationship between a healthy forest and Vermont’s craft beer industry, von Trapp looks back to the deforestation of Vermont’s landscape in the 1800s, when 80 to 90 percent of Vermont’s forests were cleared for agriculture. “The impact on streamflow was severe,” said von Trapp. “Vermont took a hit, but we learned a lesson.” 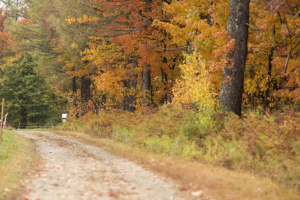 The von Trapps maintain more than 100 kilometers of trails on the property for year-round recreation including hiking, mountain biking, snowshoeing, and cross-country skiing. Photo by Erica Houskeeper.

Without leaves and branches to intercept and slow the fall of precipitation to the earth, extreme runoff and flash flooding events became more common, and higher elevation soil was washed down the hillsides to permanently reside in Vermont’s rivers and streams as sediment. Without that rich layer of forest humus to collect and retain water, the earth became dry and susceptible to forest fires that scorched more than 20,000 acres in Vermont in the early 1900s.

The forests we see around us in Vermont today are the result of an intentional effort to return pasture land to forest and prevent uncontrolled development. Those revitalization efforts began in the 1920s, eventually leading to the establishment of the Green Mountain National Forest in 1932. However, as von Trapp notes, “the trees that were left were the trees that nobody wanted,” resulting in a “mono-aged” forest of primarily low-grade wood, a challenge for today’s forest products industry.

“Forests that are untouched will change anyway, and not necessarily in the way you want them to,” said von Trapp. “We can manage the forest to provide the products and environment we want, but we have to do so intelligently.”

So, what does that have to do with craft beer?

Water is the main ingredient in beer. More than 95 percent of beer is water, and more than half of America’s water comes from our forests. In Vermont, where we now have more than 4.5 million acres of forest covering about 75 percent of the state, many of Vermont’s craft brewers point to the quality of their water as a critical ingredient to the taste, mouthfeel, aroma, and color of the final brew. In 2019, the Vermont Brewshed Alliance was formed to “protect the state’s waters where many people enjoy it most—in a pint.” Recognizing that “clean water is integral to the health of people, animals, farms, and forests, and is also the prime ingredient in great tasting beer,” the initiative highlights the importance of clean water in making high-quality beer.

According to an article in Beer Connoisseur, different styles of beer originated geographically, depending on how the purity, pH, and trace minerals of local water sources interacted with hops, yeast, and malt. Today, many brewers around the country can alter municipal water for desired results, but von Trapp Brewery works with the natural composition of their spring, brewing seasonal and year-round lagers, which have won numerous awards in national and international competitions.

All told, the Trapp Family Lodge property encompasses 2,600 acres—70 acres of which are developed, 130 of which are in pasture, and 2,400 that remain forested. A beautiful example of how working land can be actively managed to meet a myriad of interconnected objectives, the von Trapps raise Scottish Highland Cattle, produce maple syrup, and maintain more than 100 kilometers of trails on the property for year-round recreation including hiking, mountain biking, snowshoeing, and cross-country skiing. Visitors to the resort this fall may notice neatly stacked timber piles along Haul Road, the yield from an active harvest that will, in part, supply the lodge with firewood.

And all of this, notes von Trapp, is compatible with protecting the spring that supplies the Bierhall with fresh, mountain water and preserving large tracts of forest for wildlife. Any frequent visitor of the trails will surely stumble upon deer, bear, fox, or moose at some point. And most will certainly appreciate the protection of the canopy during a soft rain or gentle snowfall. To ensure that the property and the trails will be “retained forever in their natural forested, scenic, open space, wildlife habitat condition,” von Trapp donated a 1,100-acre conservation easement to the Stowe Land Trust in 1995.

Sam von Trapp explores and recreates in the same woods that his father Johannes enjoyed as a child. To ensure that the property and the trails will be “retained forever in their natural forested, scenic, open space, wildlife habitat condition,” Johannes von Trapp donated a 1,100-acre conservation easement to the Stowe Land Trust in 1995. Photo by Erica Houskeeper.

Today, von Trapp’s two adult children, Sam and Kristina, along with his four grandchildren, enjoy exploring and recreating in the same woods that Johannes himself enjoyed as a child. While his stewardship of the forest is guided by his training as a forest ecologist and decades of practice, he notes it has always been the place where he finds solace. “These woods are magical,” adds Sam, who has inherited his father’s love for the land and von Trapp agrees. “The forests are home to birds, insects, and animals; they are a carbon sink; and they provide us with the water we need to live. I get a little claustrophobic most places east of the Mississippi, but here I can breathe.”

Vermont’s forest products industry generates an annual economic output of $1.4 billion and supports 10,500 jobs in forestry, logging, processing, specialty woodworking, construction and wood heating. Forest-based recreation adds an additional $1.9 billion and 10,000 jobs to Vermont’s economy. The Vermont Forest Industry Network creates the space for industry professionals from across the entire supply chain and trade association partners throughout the state to build stronger relationships and collaboration throughout the industry, including helping to promote new and existing markets for Vermont wood products, from high-quality furniture to construction material to thermal biomass products such as chips and pellets.

Learn more or join at www.vsjf.org. For COVID-19 updates from the Vermont Department of Forests, Parks, and Recreation, please visit FPR COVID-19 Response.

feature photo: Johannes von Trapp, the youngest of the famed Trapp Family Singers and a forest ecologist, says a spring he discovered on the property in the early 1970s was the inspiration for the von Trapp brewery. Photo by Erica Houskeeper.