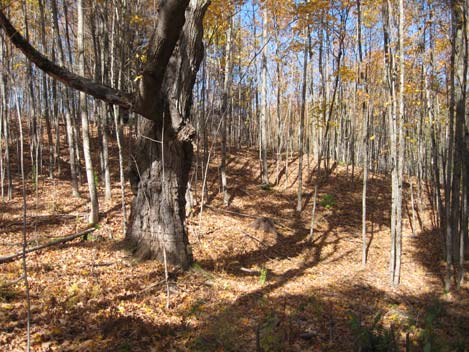 Introduction
Forest stand improvement refers to pre-commercial treatments designed to improve the species mix, stem quality and rate of growth of young forests. When these treatments are focused only on improving future timber quality, they are sometimes called timber stand improvement (or t.s.i.). When forests establish naturally on abandoned agricultural land or regenerate following timber harvest, they begin with thousands of tree seedlings per acre. By the time these forests reach maturity, only a hundred or two hundred large trees per acre remain. Nature is perfectly capable of choosing the winners and losers without our assistance, but nature may choose the open grown spruce, rather than the well formed sugar maple that we would prefer. By practicing forest stand improvement early in the development of a forest, we can adjust species composition and enable the trees we value most, to grow to their full potential.

Pre-Commercial Treatments
Foresters call treatments that do not generate enough revenue to pay for themselves pre-commercial. Typically pre-commercial activities take place in sapling or pole-size stands, or in stands where certain trees are of such low-value that they can not be harvested at a profit. These practices are usually implemented by forest landowners themselves or by contractors at an hourly rate. In Vermont, the most common types of pre-commercial forest stand improvement treatment involve one or more of the following:

When pastures revert to forest a situation commonly occurs where large, open-grown pasture trees (wolf trees) are found in a sea of saplings and poles. In some cases, these large trees may be left in place here and there as Legacy trees to promote structural and ecological complexity, but others may be harvested or girdled to make room for young trees of better quality. Girdling is the process of running a saw around the tree deep enough to interrupt the flow of water and nutrients from the roots up to the leaves and sugars from the leaves down to the roots.

We girdle those trees that would do too much damage to regeneration if we cut them down. Girdled trees die in place and break up slowly over time, generally doing little damage to surrounding trees. Additionally, large dead trees provide important wildlife habitat and eventually return to the soil where they provide valuable organic matter and nutrients. When I girdle a tree, my first step is to cut off all the low branches that might be in my way and move them out of my immediate work space. For hardwoods, this generally does not require much effort but with open-grown white pines there can be many, large lower branches. Sometimes the ground is uneven or slippery and it is just good practice to reduce the amount of additional debris that could cause you to slip or trip. I run the chainsaw around the trunk at a comfortable height, perhaps 2-3 feet above the ground, and make my cut about an inch deep into the wood. The critical thing is that both ends of the cut should meet when you complete the circle. Then I offset about six inches and make a second girdling cut. I find a single girdling cut will kill about a third of the trees, and double girdling will kill most, but not all of the rest. Even after double girdling it often takes a year or two for trees to die and the bigger trees take the longest. It may be necessary to return after a couple of years and do a follow-up treatment to pick up the few trees that were able to overgrow your girdling cuts. Small trees often break in subsequent wind events following girdling, so I prefer to cut trees down that are 10-inches in diameter or smaller and only girdle the larger stems.

Thinning and Crop Tree Release
When trees establish on a site, they quickly fill the available growing space. As the average tree grows in size, there is room for fewer and fewer trees and competition between trees for light is intense. Some trees win the battle for sunlight and persist in the stand, but most others will be crowded out of the canopy and will perish. The natural thinning process encourages full stocking of tall trees with small crowns and relatively slow diameter growth. When we thin or do crop tree release, we try to concentrate growth on the best stems and to accelerate the growth rate. We do this by identifying
those individual trees that we judge to have the greatest potential and then reducing competition for those trees by cutting some of their closest neighbors. Thinning and crop tree release differ in both the pattern of cutting and the degree of release. Thinning results in modest release, more-or-less uniformly distributed to all parts of the stand. Crop tree release focuses more significant release on just a few of the best trees. With early thinning we try to maximize the number of future crop trees, and maximize the length of merchantable stem on each tree. However, since we maintain a higher early stocking level around each partially released tree, diameter growth rate is slower than if the trees were completely released from competition. With crop tree release, we accept fewer crop trees per acre, and shorter merchantable stems, but maximize diameter growth rate by completely releasing trees from competition. The theory behind crop tree release is that a handful of trees in any stand contribute a disproportionate amount to the future value of the stand. We talk about wildlife crop trees (beech, oak, cavity trees), aesthetic crop trees (paper birch) and timber crop trees. For timber crop trees that potential value is focused in the lower portion of the stem, so if we can maximize the rate of diameter growth there, we maximize the financial rate of return of the stand.

Implementing thinning or crop tree release when the trees are too small, can damage stand development by not promoting natural pruning of lower branches. It is okay to do some very light corrective thinning in young stands, but no serious thinning efforts should take place until the average dominant trees are around 4 inches in diameter and at least 20-30 feet tall.

People often ask about spacing in young stands. “How far apart should my crop trees be? Ten feet? Fifteen?” But it really isn’t about how far apart the stems are, but how far apart the crowns are. The biological business (photosynthesis) of trees takes place in the crowns and bigger crowns produce more energy to grow the tree. A good rule of thumb for thinning in young stands is to release the crown of every potential crop tree on at least two sides (of a circular crown) so that there is 2-5 feet of space between trees. For crop tree release, release at least 3 sides of the crowns of the very best trees for 5-10 feet between trees. It is okay to release a crown on the north side, but you will get the best growth response by releasing the east, south and west sides of the crown since these are the aspects that receive direct sunlight.

PRUNING
Pruning refers to the removal of low branches to improve the stem quality of the best trees. A clear log (free of knots) can have much higher value than the same log with a few, small branches. For quality hardwoods sometimes the difference between a sawlog and a veneer log (worth perhaps five times as much), is the presence of a single, small branch. By removing the branches on the best quality stems while the trees are still small (generally 4-8 inches in diameter) there is time to overgrow the pruning wounds and produce the maximum amount of clear wood prior to harvest. The best stems to prune are those that are straight, with only a few, small branches and are free-to-grow. Hardwoods to be grown for veneer should be pruned to a minimum of 10.5-feet in height (a 10-foot log with 6 inches trim). Spruce to be grown for clapboard stock should be pruned to 12-16 feet long with an allowance for trim and white pine should be pruned to at least 16-feet high. It is important to limit pruning to only the best of the best stems. In even the highest quality stands it is seldom necessary to prune more than 50 hardwoods, or 100 softwoods per acre. In order to maximize the rate of return from pruning it is important that trees be fully released prior to pruning.

I prune low branches anytime of year with a pair of hand clippers. Be careful to cut flush to the outside edge of the branch collar, which is the slight swelling between the branch and the trunk. The branch collar acts as a barrier to decay that may try to reach the trunk from the dead branch, so it is important not to injure it during pruning. As you prune higher on the stem it becomes more difficult to fully control your cut, and more likely you will injure the branch collar. For pruning higher than I can comfortably reach, I use a pruning saw on a 6-foot pole for hardwoods. This allows me to reach to about 12 feet on the trunk with pretty good control. If you prune during the winter, snow depth can allow you to reach another foot or two. In order to prune softwoods to 16 feet or higher, you will probably need a pruning saw with an extendable pole. Because you are standing below the branches you are sawing you sometimes will get sawdust in the face and often the branch will fall on you after you cut it. I generally wear a helmet and eye protection while pruning with a saw. 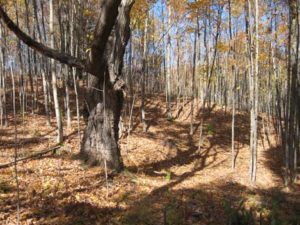