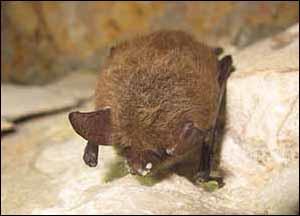 Summary
The northern long-eared bat population has been devastated by the White Nose Syndrome (WNS) throughout the eastern United States. This disease has caused a mortality rate of up to a 90-100% where present. As a result, the U.S. Fish and Wildlife Service (FWS) has listed the northern long-eared bat as threatened and established a new rule, called the 4(d) Rule, to protect the bat population during its most vulnerable life stages in areas where the disease is present.

What Regions Are Affected by WNS and the 4(d) Rule?

The northern long-eared bat’s range spans most of the eastern half of the United States. The 4(d) rule related to forest management is specific to the region impacted by WNS, called the WNS Zone (see map*). Please be aware that WNS is spreading rapidly and, as a result, the areas in which the 4(d) Rule applies are subject to change. Landowners are encouraged to check the status of WNS in their area before implementing forest management activities.

How Does the 4(d) Rule Affect Forest Management?
The rule focuses on forestry activities that include timber removal and may impact the northern long-eared bat during its most vulnerable life stages – during hibernation and during the pup season when pups are too young to fly (June 1-July 31). Within the WNS Zone, the unintentional harm, harassment or death (aka incidental take) of a northern long-eared bat is prohibited when caused by tree removal within ¼ mile of a known hibernaculum (or hibernation site, such as a cave or mine) at any time of year. There is also a seasonal restriction on timber removal around known, occupied maternity roost trees during the pup season when a 150 foot buffer around the maternity roost tree is required. Please note that non-timber removal forestry activities are allowed within these buffers.

How Do I Know If Northern Long-Eared Bats Exist on My Property?
While a survey prior to timber removal is not required under the 4(d) rule, AFF recommends that landowners consult with their local wildlife agency to determine if a known bat hibernaculum is present on or near their property. If the timber removal project is planned during the northern long-eared pup season (June 1 – July 31), use your local resources to determine if there is a known, occupied roost tree within 150 feet of the activity site. Online resources include State Natural Heritage Inventory Databases and a compilation of related website links at midwest.fws.gov/nleb/.

What Are My Responsibilities Under the 4(d) Rule?
1) Verify the presence or absence of the bat through consultation.
2) If, though consultation with local wildlife agencies or others, you determine that northern long-eared bats are present on your property, you may need to alter your management strategy to ensure protection of the bat and compliance with the 4(d) rule.
3) AFF recommends that landowners create buffers of no timber removal within ¼ mile of a known
hibernacula or within 150 feet of a known, occupied maternity roost tree during the pup season from June 1 through July 31.
4) Remember that non-timber removal forestry activities are allowed within these buffers. Active forest management has many positive impacts on bat habitat, and these regulations have been put in place to protect bats in their most vulnerable life stages.

* Given the rapid rate of spread of WNS, the WNS Zone map is subject to change and will be updated the first of every month if there are new counties with verified occurrences of WNS. Depicted WNS Zone was accurate as of March 31, 2016. 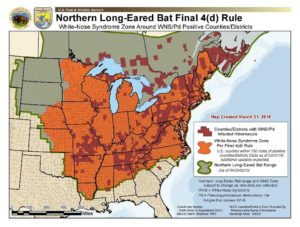