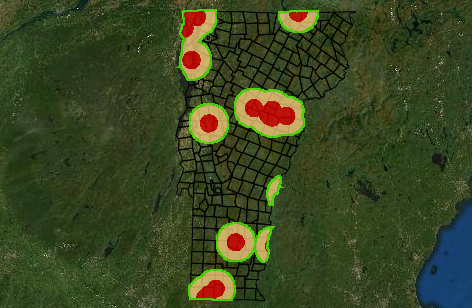 The map of the infested area in Vermont to which “Slow the Spread” recommendations apply now includes new areas in the towns of Isle LaMotte, North Hero,  St. Albans, Swanton, and Highgate. A small area in the town of Sheldon is now also included in the infested area.

The new detections were discovered on purple prism traps, a tool used to monitor for EAB. A group of dedicated volunteers along with staff from the Department of Forests, Parks and Recreation placed these traps in the branches of ash trees throughout the state earlier this summer. The traps’ color appeals visually to EAB and the traps contain an attractant and are covered in an adhesive so any insect that lands on them will get stuck, including EAB. Adult EAB beetles emerge from trees during the flight season which typically spans from June 1st through September 30th. Traps are checked twice, once in mid to late July and at the end of September. All suspicious insects stuck on them are removed and inspected by an entomologist for confirmation.

October 1 is the beginning of EAB’s non-flight season and the start of the optimal time to move ash materials from the infested area according to the “Slow the Spread” recommendations. Despite the expansion of the infested area, less than 10% of Vermont’s land area is known to be infested by EAB. Follow “Slow the Spread” recommendations to help protect uninfested forests and to give time to landowners, communities, and businesses to plan and budget for the arrival of EAB. Visit VTinvasives.org to learn more about EAB and what you can do to “Slow the Spread”.

Questions about managing ash in your woodlot or around your home, or Use Value Appraisal guidance? Check out the resources available at VTinvasives.org.