Making a Case for Community-Scale Forestry 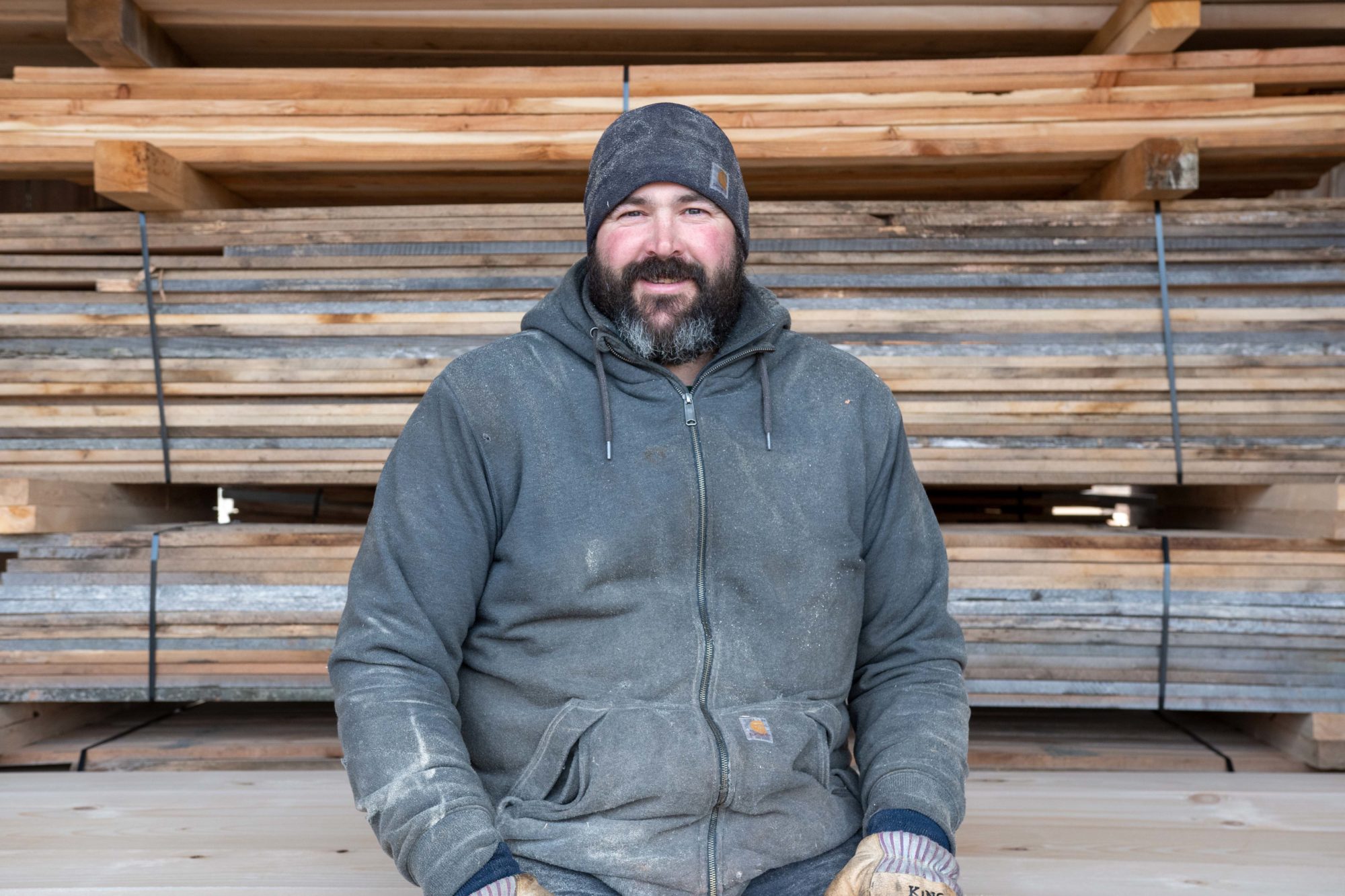 Making a Case for Community-Scale Forestry

With a mindset of staying small, a sawmill in Fletcher sees wood products as the next “go local” movement.

Tucker Riggs, owner of Laughing Stock Farm (LSF) Forest Products in Fletcher, is busier than he’s ever been. As the pandemic and resulting supply chain issues more than doubled the price of lumber, Vermonters used to buying their lumber from Lowe’s or Home Depot sought out alternatives—and found much more than competitive pricing at LSF.

“People like to talk with the person that’s sawing the wood,” said Riggs, “and they like knowing that the wood was grown just down the road from their property. They like that it was cut down by someone with kids in the same school and that they can buy their firewood from the same family next fall. That connection is lost when you buy wood products that were shipped out of the state or country for processing, and then shipped back for sale.”

Riggs and his father, Terry, founded LSF Forest Products in 2003 with a nod to the family’s farm—Laughing Stock Farm. For Riggs, working the land is part of his family’s tradition, as is a good sense of humor. As he tells it, his father is a “character and a wonderful guy, always jumping into things headfirst.” His parents got into farming in the 1970s when they bought a piece of land in Jericho. His mother, Mary Lynn, was a teacher and his father ran a construction company while the family raised livestock on the farm. The land turned out to be mostly swamp and, after a short experiment milking goats, Terry’s in-laws, who owned a pristine dairy farm in Richmond, jokingly named their son-in-law’s farm Laughing Stock Farm. The name stuck.

Despite the fact that business at LSF is up more than 60 percent, Riggs has no intention of growing much larger than he is today. Community-scale milling is an intentional part of his business plan and something he’s passionate about preserving.

“Part of it is tradition,” said Riggs, “but a big part of it is about preserving our rural economy and not being reliant on global supply chains.”

Local mills as a conservation tool.

One of Riggs’ employees is Lucy Rogers, Vermont state representative for Waterville and Cambridge. When Rogers isn’t at LSF, she’s at the statehouse advocating for policies that support rural economic development and Vermont’s working landscape.

“Big picture, local sawmills are a conservation tool,” says Rogers. “Vermont has an amazing forested landscape and a unique challenge in that most of it is privately owned. It’s expensive for landowners to keep forested land as forest. They need a market that allows them to log their land and offset some of those expenses.”

Close to 80 percent of Vermont’s forested landscape, more than 3.5 million acres, is privately owned. LFS purchases most logs from within a 30 mile radius of the mill, currently buying from local loggers including Ben Lepesquer, Rob Lacasse, Dana Decker, and Dave Cushing.

Established in 2003, the bulk of LSF’s customers are within an hour and a half drive of the mill. About 70 percent of sales are to timber framers in Vermont and New York, including Sills Post and Beam, Goosewing Timberworks, Winterwood Timber Frames, and Mad River Post and Beam, among others. “We sell a high-quality product with tight specs and really cater to that industry, that’s our niche,” said Riggs. “Our customers are particular and we make sure we’re giving them the best possible product.”

The other 30 percent of sales is to neighbors who need lumber for building a wood shed or garage. Some of it is price driven, according to Riggs, but some of it is a growing appreciation for local wood and supporting Vermont’s forest economy.

“Our customers like knowing that buying their wood from LSF helps put dinner on the table for a local logging family,” he said.

Rogers adds that local lumber has the added benefit of a reduced carbon footprint. “When most of your business is within a 30 mile drive, it’s better for the environment and keeps more money in the logger’s pocket because they’re paying less for transportation.”

Riggs likens forest products to the local food movement in Vermont, noting that the industry needs more than just high-end, fine wood products to remain viable. “We’re more like the farmer that grows three acres of carrots and sells to Hannafords than we are like dinner at Hen of the Wood,” said Riggs. “We’re sawing those 2×4’s that someone is going to use to make a wood shed, not the live edge slab that becomes a fancy salad bowl.”

The challenges of workforce, regulation.

The realities of owning and operating a small sawmill in Vermont are, at times, challenging, Riggs acknowledges. Without economies of scale, it can be difficult to manage staffing. LSF currently has five full-time employees, including Tucker and his father, Terry. In the summer months, that number typically grows to seven, and Riggs relies on part-time workers like Rogers to round out the team. He is contemplating adding another one or two full-time positions to keep up with demand, but is committed to keeping the mill small and manageable, at least for the time being.

The biggest challenge, however, says Riggs, is navigating permitting. “We are dealing with the same permit process that a Walmart would go through,” he said. “Since I’m doing most of the sawing myself, and the bookkeeping in the meantime, there’s not a lot of extra time and we can’t afford a consultant to get us through the process. In order to pay someone to manage permitting, we’d have to grow a lot.”

Rogers, who sits on the legislature’s Rural Economic Development Working Group, sometimes called the “Rural Caucus,” recently toured a number of forest economy businesses in Vermont and says LSF is not alone in feeling frustration with the permitting process.

“One really important piece of making bureaucracy manageable for businesses of different sizes is to have regulations scaled to the size of the business, which is often missed in lawmaking” she said. “People like Tucker are getting up at four in the morning, doing their bookkeeping and then working at the mill all day, so they can’t be present in the statehouse when laws are being made, whereas larger businesses can have representation.”

Rogers is specifically focused on how businesses like LSF are considered under the law. “The very first page of Act 250 says that farming and logging are not considered development,” she said. “Right on the first page, we’ve said that maintaining working lands is important, so we won’t regulate in the same way we regulate subdivisions, for example. Sawmills are kind of in between—it’s a business with a physical location, but it’s supporting the working landscape more than it’s supporting development. So, to regulate in the same way is a strange value statement when the purpose of Act 250 is to make sure Vermont doesn’t get lost to development.”

“There is a way to think about forest industry businesses as conservation tools that recognizes their role in maintaining the working forested landscape,” she continued. “In that case they fall more into the category of what Act 250 is protecting versus what it’s regulating.”

A pile of sawdust, a day well spent.

Despite those frustrations, Riggs maintains that he wouldn’t want any other job. “I’m a pile guy,” he said. “I need a pile at the end of the day to feel fulfilled. Whether it’s a pile of wood, sawdust or logs. Spreadsheets and business plans are not a big enough pile to feel like I’ve accomplished something.”

Rogers agrees. She found her job at LSF through a Front Porch Forum ad in 2019. Recently elected to the legislature, she wanted a part-time job that met two criteria: 1) she wanted to be outside doing physical labor to balance her work in the statehouse and 2) she needed a consistent schedule, which ruled out jobs that are weather dependent. “It has turned out to be such an amazing opportunity to learn about the forest industry,” she said. “It’s important to bring those perspectives to the statehouse.”

Beyond the satisfaction of a good day’s work, Riggs also points to the unique bond that exists within the Vermont forest industry. “The people in this work are unique—social, yet happy in their own realm,” he said. “We like being in the woods alone, but the bond within the network is strong and everyone can feel that. It’s what I enjoy the most.”

Vermont’s forest products industry contributes $1.3 billion to Vermont’s economy and supports more than 9,000 direct and indirect jobs in forestry, logging, processing, specialty woodworking, construction and wood heating (2017). Those numbers more than double when maple production and forest-based recreation are factored in. The Vermont Forest Industry Network creates space for strong relationships and collaboration throughout the industry, including helping to promote new and existing markets for Vermont wood products. Learn more or join at www.vsjf.org.