Managing the Forest to Save a Species 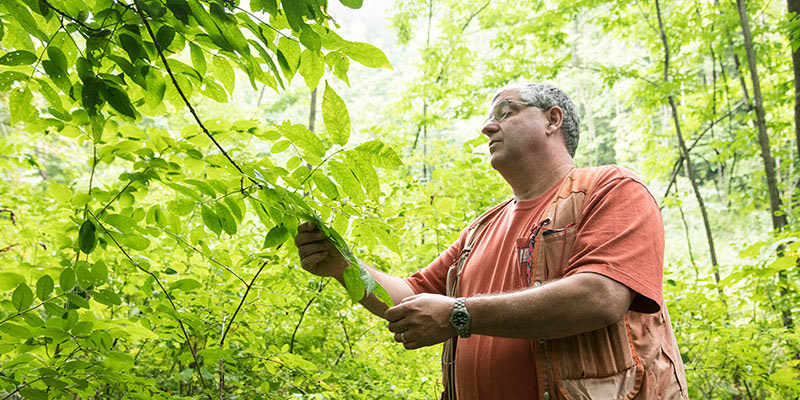 Managing the Forest to Save a Species

On a perfect summer day, 40 foresters gathered on woodland in Rupert. They were here to learn more about managing forests with ash trees, given the threat of Emerald Ash Borer (EAB). The larvae of this invasive beetle chew tunnels under the bark; this cuts off water and nutrition and usually kills the tree. EAB was first found in Vermont in 2018; it’s confirmed in 10 towns today.

Forester Alan Calfee hosted the workshop on land he conserved with VLT. He helps manage around 25,000 acres on parcels ranging from 20 acres to 5,000. EAB hasn’t yet been found on those lands, but people are asking him about it. “The workshop was a bit of an awakening for me,” he reflects. “It really hit me that this pest is here. We have to start managing the forests for EAB now.”

The workshop was part of a new VLT effort to help people improve the health of their land. VLT has held events, with partners, for landowners and professionals on three topics: EAB, invasive plants, and managing deer populations for forest health.

Vermont is the 31st state with confirmed EAB so it might benefit from what other states have learned. “Just recently, people assumed EAB would kill nearly every ash tree,” says VLT forester Pieter van Loon. “But new research suggests there’s more variability.” While some places have seen almost no survival, 75 percent of white ash survived in parts of Michigan, which has had EAB for 17 years. No one knows why. “The takeaway is don’t cut all your ash because it may live.”

“We have to do whatever we can to create an understory of ash,” Alan adds, “so that if the bug takes out the overstory we have the greatest chance of getting new trees to seed-bearing age.”  He advises people to be aware that ash trees are either male or female, and while a single female tree needs several male trees nearby, it is also important to maintain large, healthy female trees “so there are seeds for the future.”

Alan sees hope in owners of conserved land. “The land trust has a population of forest owners who think long-term and can make a difference.” He adds, “It’s about saving a species.”